If you could go back in time and look at War Memorial Stadium in 1948, you probably wouldn’t recognize it. The stadium has gone through many renovation projects and expansions that changed the appearance of the stadium over time. Back in the mid-20th century, perhaps no one could have foreseen that millions of people would walk through the gates of the stadium for 70 years to witness sports miracles and see history made.

The stadium originally opened with a natural grass surface and two large grandstand seating areas on the east and west sides. The north and south sides of the stadium were open and looked more like amphitheater seating than a football stadium. War Memorial Stadium opened with an original seating capacity of some 31,000. Expansion has seen the stadium’s capacity grow to more than 54,000. The once-open areas on the north and south sides of the stadium have been closed with additional seating. Concession stands and restrooms have been renovated. The press box, once voted the best in the country, was torn down, rebuilt, and reopened in 2010. The stadium may be 70 years old, but it continues to upgrade, improve, and remain a vital part of Arkansas. 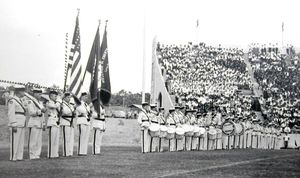 War Memorial Stadium was dedicated as a tribute to Arkansans who had given their lives in the service of their country during the two great World Wars. Over time, it has evolved into an active tribute to all Arkansans who have served and paid the ultimate price for their country. Military personnel have been honored over the years through programs, tributes, and monuments. The Sturgis Plaza opened in 2008 on the northwest side of the stadium as a place of remembrance and reflection. The plaza was the centerpiece of the celebration of War Memorial Stadium’s 60th anniversary and rededication.

Nothing in the stadium’s history has brought more Arkansans together than University of Arkansas football games. The stadium’s first event in 1948 was a Razorback football game, and War Memorial Stadium has since hosted more than 200 Razorback football games. The stadium’s tailgating atmosphere is one of the best in college sports, expanding west to the War Memorial Golf Course. Championships have been decided on the field at War Memorial Stadium. Over the years, Arkansas has won or shared 11 Southwest Conference championships and several West Division titles in the Southeastern Conference. Maybe no game was more memorable than the 2002 contest between Arkansas and Louisiana State University. LSU needed a victory to stay in the conference and national title hunt. Trailing late in the fourth quarter, the Razorbacks marched quickly downfield and Matt Jones connected with DeCori Birmingham for a touchdown with seconds remaining. David Carlton’s extra point gave the Razorbacks a 21-20 victory in what has been dubbed the “Miracle on Markham.” 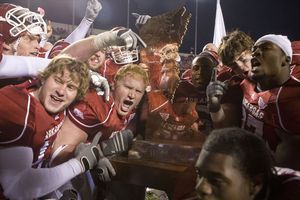 War Memorial Stadium even welcomed the National Football League to Little Rock in 1949, when the Philadelphia Eagles played the Los Angeles Rams. Former Arkansas Razorback Clyde “Smackover” Scott played in the game for the Eagles.

War Memorial Stadium is also the home of the Arkansas Activities Association High School State Football Championship Games. The 2005 5A state championship game set the record for highest attendance for any high school title game. Little Rock Catholic High School for Boys and Little Rock Parkview High School (LRSD) both play their home games at War Memorial Stadium. Neighboring high schools Benton and Bryant play against each other every year at War Memorial Stadium. The game, known as “The Salt Bowl,” is considered the state’s biggest and most competitive rivalry. This Saline County Showdown routinely draws 30,000 fans or more and continues to grow.

In addition to football, the Little Rock Rangers soccer team calls War Memorial Stadium its home. The Rangers, of the National Premier Soccer League, are in their third season of play and already in the top 10 in attendance nationally.

Sports aren’t the only events to make history at War Memorial Stadium. Concerts such as the Rolling Stones, Billy Joel and Elton John, The Eagles, George Strait and N’ Sync have graced the stage at the stadium, drawing tens of thousands of fans for each show. In 2017, big concerts returned to War Memorial Stadium when Guns N’ Roses played to some 25,000 music lovers.

The late Reverend Billy Graham hosted an event at War Memorial Stadium that drew 270,000 people over the course of a week. Bob Hope’s “Hope across America” tour drew 49,000 fans in 1991.

From show-stopping entertainment to miracles on the gridiron, War Memorial Stadium has been home to history. The Stadium has been Arkansas’s most beloved venue for 70 years — and counting — and will continue to bring the best in sports and entertainment to the great state of Arkansas, all while serving as a distinguished memorial to those who have served this country.